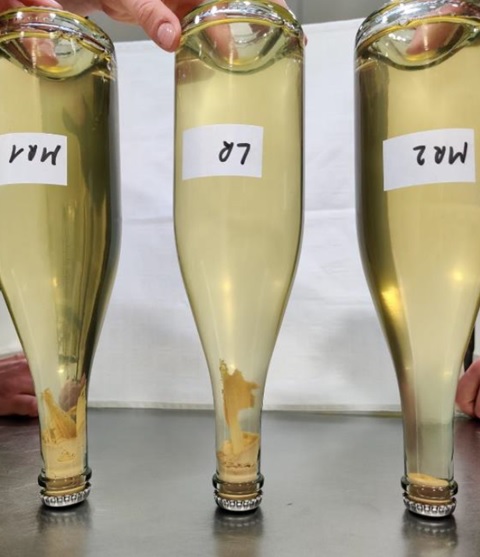 The continuing trend in Austria to produce natural wines (Pet Nat, Natural Wines) requires that different ideas from this direction be taken up. T his paper will deal with more advanced types of production. The focus of this work will be on the avoidance of tartar and the resulting problems. In practice, the tartar problem is currently considered to be the biggest problem that still needs to be solved or at least minimised.

Although the precipitation of potassium bitartrate has no significant disadvantages in terms of sensory perception, tartaric stabilization is an essential process of wine production to achieve a more attractive product for customers. Especially for “Pét Nat”, which means “Petillant Naturel” and is an increasingly popular product, tartaric stabilization is important to reduce the risk of the reluctantly seen phenomenon of gushing. As “Pét Nats” are gaining increasing importance, the main focus was laid on tartrate crystal precipitation.

In the course of this work eight production variants of Pét Nat were carried out with a Chardonnay must. One batch was cross-flow-filtered to remove as many turbidity-causing substances as possible. Two other variants of Pét Nats were produced, without treating them with stabilization methods. One of these was fermented spontaneously, the other was fermented by means of cultured yeast. In another case one must was cooled down to 4° C. Two further batches of the must were treated by contact tartrate (vaccination crystals) and potassium polyaspartate to prevent big amounts of potassium bitartrate at the bottom of the bottles. Finally, the last two variants were fermented and stored in different bottle positions.

By means of analytic procedures it could be detected that the Pét Nat, which was fermented spontaneously and the Pét Nat, which was cross-flow-filtered contain the least amount of potassium. Because of this, one may assume that for these variants most potassium bitartrate precipitated before the disgorgement. Whereas the variant, which was inoculated by yeast and the variant, which was treated by contact tartrate contain noticeably higher amounts of potassium. The highest amounts were detected at the Pét Nat which was treated by potassium polyaspartate and which was cooled down to 4° C for ten days. The higher amounts of these variants revealed that less potassium precipitated and thus potassium bitartrate was kept in solution.